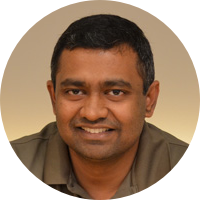 Anand Babu (AB) Periasamy co-founded Gluster in 2005 to commoditize scalable storage systems. As CTO, he was the primary architect and strategist for the development of Gluster file system and the platform. Gluster was one of the first software based storage solution. The company was acquired by Red Hat in 2011.

Prior to Gluster, AB was CTO of California Digital Corporation, where his work led to scaling of the commodity cluster computing to supercomputing class performance. In 2004, AB led the development of world’s second fastest Supercomputer code named “Thunder” for Lawrence Livermore National Laboratory. He is also the author to various Free Software projects.

AB serves on the board of “Free Software Foundation – India”.